Our current class text voted for by 5F is: Varjak Paw 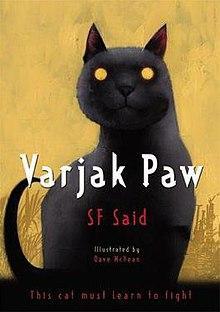 About the book:
Varjak Paw is a Mesopotamian Blue kitten.  He lives high up in an old house on a hill.  He's never left home, but then his grandfather tells him about the Way – a secret martial art for cats.

Now Varjak must use the Way to survive in a city full of dangerous dogs, cat gangs, and strangest of all, the mysterious Vanishings...

"There are Seven Skills in the Way of Jalal," whispered the Elder Paw.  "We know only three of them. Their names are these.  Slow-Time.  Moving Circles.  Shadow-Walking."

SF Said is an award-winning author.  He was born in Lebanon in 1967, but has lived in London since he was 2 years old. He wrote his first novel, Varjak Paw (2003), while working as a speechwriter for the Crown Prince of Jordan, and then as an arts journalist and film programmer.

Varjak Paw won the Nestlé Smarties Book Prize for Children's Literature, as well as regional book of the year awards in Gateshead, Stockton and West Sussex. It has since been adapted as a stage play and an opera, and a film version is in development. It has been translated into 12 languages, and worldwide sales are now over half a million.

The sequel, The Outlaw Varjak Paw (2005), won the BBC's Blue Peter Book Of The Year, was nominated for the Carnegie Medal, and won the Leicester Teenage Book Of The Year.  Varjak Paw is currently featured on the CLPE's recommended reading list for primary schools, and both books are being taught in classrooms around the UK.

SF's third novel, Phoenix (2013), is an epic space adventure for readers of 9 and up. It was chosen as an IBBY Honour List Book for the UK; shortlisted for the Guardian Children's Fiction Award; nominated for both the CILIP Carnegie Medal and the Kate Greenaway Medal; and won both the Warwickshire Secondary Schools Book Of The Year Award and the Haringey Children's Book Award.  Like the Varjak Paw books, it is illustrated by Dave McKean, and published by David Fickling Books.

SF Said is also active in the wider world of literature and arts.  He has judged the Guardian Children's Fiction Prize, the Whitbread Book Awards (now the Costa Book Awards) and the Amnesty CILIP Honour.  He has given talks at the British Library, the British Film Institute, the Ashmolean Museum in Oxford, and on BBC Radio 4.  He has written extensively about children's and young adult fiction for both the Guardian and the Daily Telegraph.